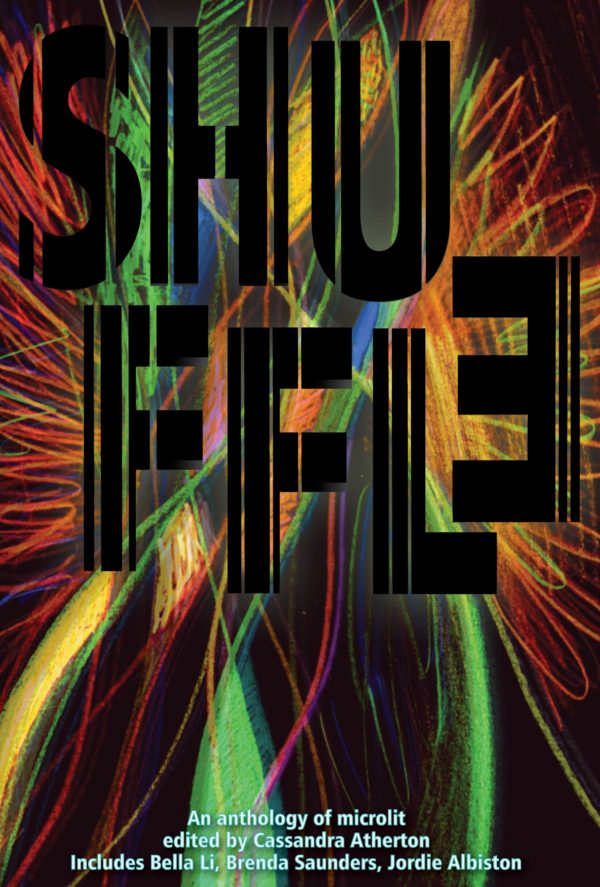 As we are all preparing for Microflix’s submission deadline, the 30th of June, a little spark of inspiration can be what you need to push that idea out of your mind and onto a camera!

Today I’ll be talking about three microlit texts from the anthology Shuffle, ‘Driving With Gurrumul’ by Andy Kissane, ‘Aftermath’ by Shady Cosgrove, and ‘Barrage’ by Jude Bridge. Each of these texts showcase a variety of approaches to adaptation, and how to adapt a text that may seem too expensive to achieve for a low-budget/ no-budget film.

‘Driving With Gurrumul’ explores an individuals deep connection with the music of Gurrumul (Geoffrey Gurrumul Yunupingu). The narrators deep connection is at its highest when they are alone in a car and driving with the music. The text has quite vivid imagery of how it personally feels to listen to the music for the narrator, as they are exploring how the music might too feel for the singer Gurrumul since he is born blind. The narrators imagery and their connection that evokes such, provides a fantastic platform to create amazing cinematography shots. Despite the text being shot in a car and not all filmmakers having access to a green screen for getting that moving car effect, there are still avenues you could take to adapt this text easily. Firstly, rather than setting the story in a car, you could change the setting to someone bedroom, replacing the car imagery by creating visual imagery with the space. You could do this same method but rather than one space, you could have the narrator walking through multiple spaces, such as they’re listening to Gurrumul on their headphones and maybe walking through lots of small empty street. One last setting could be an empty dance studio, if you have to a dancer, the film could be of a dance to the song, thus literally showing how Gurrumuls music is making them feel. The authors imagery in the text can easily be applied to another setting that may be easier to create whilst still imagining the mind of the narrator.

‘Aftermath’ is a simple, but melancholy story that explores how music can create an almost telepathic communication between two people. In this microlit text, the narrator is woken up in the early hours of the morning to their neighbour playing Metallica loudly. However, they are not upset, instead they are met by their Metalicca playing neighbour sobbing and falling into their arms at the end of the text. I love how this story shows a different side to metal music, which stereotypically is associated with feelings of anger, by both its listeners and bystanders, whereas this story shows feelings of sadness and creates a sense of downheartedness. In order to show this telepathic communication between the narrator and their neighbour, as well as the downhearted tone of the story, you would only need two actors and one house or apartment to set the story in. The film could track the narrator as they are awoken by the music, look at the time, make their cup of tea, sit outside and look at their surroundings, till their finally joined by their neighbour, sobbing. In this sequence you could include close up shots of the narrator looking either worried (about someone) or unbothered by the loud music. Instead of the narrator making a cup of tea just for themselves, they could make two, but the second teacup could be hidden in the sequence, and so not to give away the entrance of the neighbour but to hint to it during this sequence. When the narrator sits on the steps outside, you could shoot this in a two-person shot, without the neighbour there yet, again hinting at their arrival but not giving it away. To further highlight this sense of telepathy where the narrator knows of the sadness and soon arrival of their neighbour, the sequence could involve other actions the narrator could do to hint at the arrival. For example, they could pick up a second jumper to bring outside, or when the music changes to Led Zeppelin, in the break before the song starts, the narrator could whisper “Zeppelin”.

‘Barrage’ is an abstract story which leads the reader through a series of images that follow on from the last. The story begins with how “rain sounds like sausages on a fry pan” and ends with how “movie food is too loud.” While the stories journey is a random one, an adaptation could follow this randomness and simply be a montage of shots that capture all the random elements in this text. Close ups of sausages frying on a fry pan cut to closeups of rain hitting the pavement, cut to a person scoffing down lots of sausages, cut to a behind shot of them vomitting them up, cut to an extreme closeup of someone yawning, and so on. This quick cutting montage could be accompanied by a soundscape that builds and builds and builds as each shots accompanying sound effects is added to the scape.

I hope these ideas have sparked your imagination as your thinking of which text your going to adapt as part of your submission to Microflix! Don’t forget we have a discount for student films, but otherwise its only $25 to submit, and only has to be a maximum of three minutes in length! Happy submitting!!!!

Anastazija (Taj) Luksic is a student at University of Technology Sydney, where in 2017 she completed her Media Arts and Production degree, and is currently finishing off her Creative Intelligence and Innovation bachelors. During her degree she worked on personal documentary projects, with one screened at the Focus On Ability Film Festival 2017. She also volunteered on a number of sets ranging from a commercial for Batyr, to ‘The Horizon’ web series.

Hello all! The Microflix Festival and Awards are officially over for this year! We held our festival and awards night on Friday the 26th of November and had an incredible turnout as well as some fantastic participation from our audience. It was wonderful to see people engage with the works screened in the chat and …